We need your support to help secure the future of this valuable resource. There are various ways you can do this – most importantly by using the Dictionary and encouraging others to do so, but you can also help by becoming a Friend of the Dictionary. If you wish, you can also show your support by making a donation as explained below.

Friends of the Dictionary

The chief aim of the Friends is to introduce the Dictionary to as wide an audience as possible here in Wales as well as to publicize and promote its use to a global audience. By joining the Friends of the Dictionary you will be helping to safeguard the future of both the Dictionary and the Welsh language itself.
Users can access the Dictionary, both online and by installing our app on a smartphone or tablet, from wherever they happen to be.

Join us and help promote this priceless resource 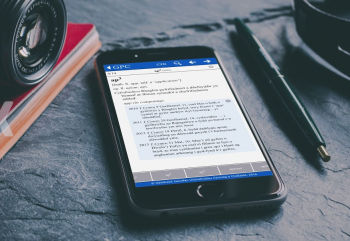 GPC wherever you go

As a Friend you will receive:

as well as the chance to interact with other Friends and be an ambassador for the Dictionary and its work.

Annual membership fees:
£10 for adults; £5 for pensioners, students and the unemployed.

To join the Friends of the Dictionary please click – JOIN

On Saturday 17th June the official launch took place of the Friends of the Dictionary in the Drwm at the National Library in front of a welcome audience to mark this historic event in the Dictionary’s history.

The proceedings began with Arwel Ellis Owen (Chairman of the Board of Directors of the Centre of Advanced Welsh & Celtic Studies), talking about Saturday’s word of the day, ‘noddwr’ (patron). An apposite choice given the Dictionaries quest to increase it’s ranks of supporters. He was followed by Andrew Hawke (Managing Editor) who gave a summary of present activities at the Dictionary including our future plans. He explained that one of the principle reasons for setting up the Friends of the Dictionary was to establish a group of would be ambassadors to help raise awareness and encourage new members and supporters.
He then introduced the Friends president, crowned bard Myrddin ap Dafydd. 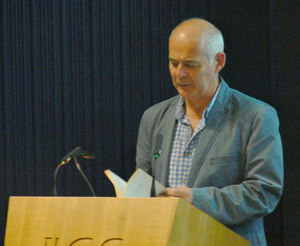 Myrddin recounted tales of customers at his parent’s book shop in Llanrwst eagerly awaiting the arrival of the latest printed edition of the Dictionary in order to pore over it’s pages in search of new gems. Fishermen, farmers, shopkeepers, carpenters, teachers and ministers among others, the Dictionary was a valuable resource and a comfort to them all as indeed it is to Myrddin ap Dafydd today. He described how he would frequently lose himself between the pages, whether at the office or at home, easily sidetracked from his original quest into other articles entranced by the wealth of information regarding the use, history and development of these magical words.
He led us on a lexicographic journey through the real ale brewing industry. He thanked the Dictionary for, as he put it, ‘casking the past to quench the present thirst and, to providing an ample supply of brewing barley to satisfy future demand’. (On such a warm and sunny day he undoubtedly tickled the taste buds of more than a few audience members!).

Professor Dafydd Johnston chose ‘bach’ (small) as his subject. Though very common he demonstrated just how interesting and rich a word it is. It was a favourite of Dafydd ap Gwilym who’s poetry provides the Dictionary with the earliest examples of it’s use. Dafydd went on to explain that ‘bychan’ was the more formal version in earlier times and demonstrates Dafydd ap Gwilym’s habit of using the more informal versions of a word.

A snapshot of the daily work here at the Dictionary was given by one of our Senior Editors, Dr Angharad Fychan. She explained the extent to which the work has changed over the last 20 years. The readily searchable digital resources available to us today have transformed and accelerated the way we work. However, our collection of over 2½ million slips, collected over the past century, is as important today as ever. She described our moves to reach out and strengthen ties to the wider public through features like Word of the Day on platforms like Facebook, Clecs, and Twitter; a relationship that works both ways as we benefit from user feedback. She spoke also, about the dangers of standardisation that risk the losing of specifically regional and localised word variants urging us to keep on using these and to pass them on to the Dictionary such that we may record them.

And, to close the occassion it was a pleasure to welcome former Dictionary staff member Tegwyn Jones who amused the audience with descriptions of some of the more curious and interesting place names around Penbont Rhydybeddau where he was raised. 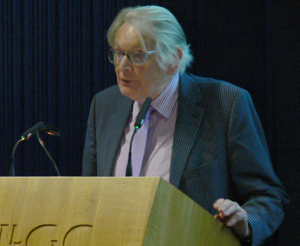 He enriched his explanations with interesting facts and tidbits about some of the colourful people and characters associated with these places, tales that served to add dimension and significance to a mere name.

Refreshments and lively conversation followed and, there was the opportunity to show people around the Dictionary offices where they could also meet and talk to staff. It was good to see so many taking interest in our work. 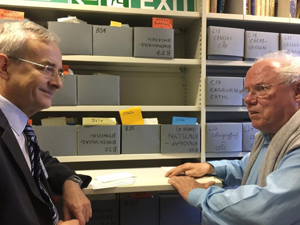 We welcome new members to the Friends and, as Myrddin ap Dafydd put it ‘We need our Friends to support the work… and promote the Dictionary. And these days, more than anything else, it’s good to have Friends to help protect and conserve the Dictionary’.