Our new Android and iOS apps are now available for download.

Featuring the richness and wealth of knowledge our users have come to expect from GPC our new app allows you to take the dictionary with you wherever you go.

The launch of the app coincides with the addition of 400 new entries to the dictionary making this a double celebration.

With the added option to download the dictionary database to your phone or tablet you can enjoy the power of GPC even when you don’t have an internet connection.

You can use the App Support page (Nav bar on right) to submit any queries you may have regarding the app and to view the app user guide and answers to common questions.

Click here for more information about the app launch.

Launch of the GPC apps

There was considerable excitement in Ysgol Penweddig, Aberystwyth on Wednesday, 24 February when the Geiriadur Prifysgol Cymru app was launched. 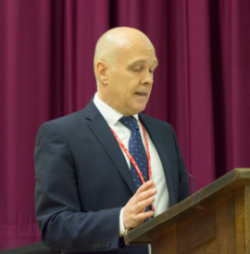 The app is one of ten projects which have benefited from Welsh Government funding to promote the use of Welsh through technology and digital media. 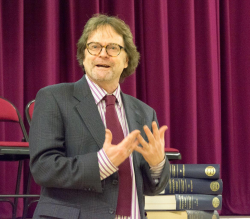 Gareth Morlais, on behalf of the Welsh Government, explaining the importance of the project

The Dictionary of the Welsh Language has been online since June 2014 but is now available as an app for mobile phones and tablets. The app permits access to the entire data of the Dictionary and differs from GPC Online in that it is possible to download all the data to your device so that it can be used without an Internet connection. 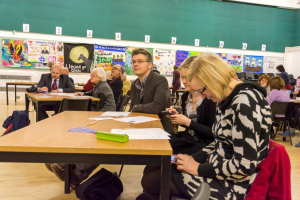 Downloading the app & trying it for the first time

The app received considerable attention in the media and the press. There were a number of items on Radio Cymru and Radio Wales during the day. BBC Cymru Fyw prepared a quiz based on content from the Dictionary, see http://www.bbc.co.uk/cymrufyw/35640098 and Craig Duggan came to the school to interview people attending the launch for the programme ‘Post Prynhawn’ including some sixth-formers who have started using the app to help with their school work. 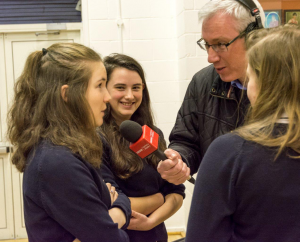 Penweddig pupils explaining how useful the new GPC app will be

The interview can be heard here (in Welsh):

The app also contains two simple word games – one to search for a hidden word and the other to solve an anagram.
To accompany the launch, more than 400 new words were added to the Dictionary. Amongst them are a number of food-related words such as eisin (icing), eidionyn (beefburger), grawnffrwyth (grapefruit), hambyrgyr (hamburger), harico (haricot (bean)), lasania (lasagne), llysfwytawr (vegetarian; herbivore), and macarŵn (macaroon), and the words hashish (hashish) and goryfed (to drink to excess) have also been incorporated! Computing terms like e-bost (e-mail), e-bostio (to e-mail), gwefan (website) and gwallneges (error message) also appear for the first time alongside jog (a jog (run)) and jogio (to jog).
Within a week of the launch, over a thousand people have downloaded the app.
To get your copy free, click here.

Today marks the official announcement of the availability of the new GPC app for Android & iOS
bringing the power of this historic dictionary to your mobile device.

We’re delighted to announce that we are currently conducting final testing of our new app with a view to launching on Google Play and iTunes later this month.
We’ll post further information including download links prior to release.

You can use the App Support page (Nav bar on right) to submit any queries you may have regarding the app and to view the app user guide.

Older posts are archived and accessible under the News button in the navigation panel on the right.