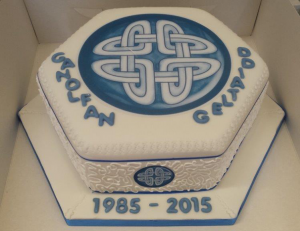 On Thursday 1st October, the Centre for Advanced Welsh & Celtic Studies (CAWCS), where the Dictionary unit has been housed since 1993, celebrated its thirtieth anniversary.
Having been founded by the University College of Wales, Aberystwyth in 1978 and transferred to The University of Wales, CAWCS began its work on the 1st of October 1985 in a building on the sea front. 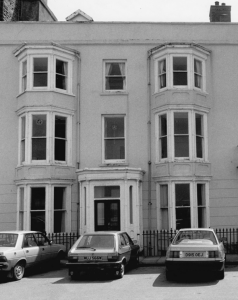 The late Professor R. Geraint Gruffydd was the institution’s first director and he and his research team’s first ambitious project was to edit all the surviving poetry of the Poets of the Welsh Princes dating from the 12th and 13th centuries.

The Centre relocated when their new home was completed and opened in 1993 and is now situated alongside, and connected to, the National Library of Wales. It was at this time that the Dictionary unit which had, up until then, been provided with office space by the National Library moved in to their new offices at the Centre. 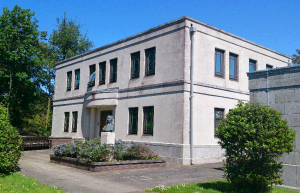 Over the years the Centre has undertaken a number of pioneering projects including The Social History of the Welsh Language, Poets of the Nobility, The Visual Culture of Wales and Wales and the French Revolution to name but a few.
It has published a large number of scholarly texts and, more recently, launched web sites such as Guto’r Glyn.net and the University of Wales Dictionary of the Welsh Language site including GPC Online.

The following poem was written especially for the occasion by former staff member Eurig Salisbury:

Here are just three of the close to 400 new words added to the GPC Online website over recent weeks. 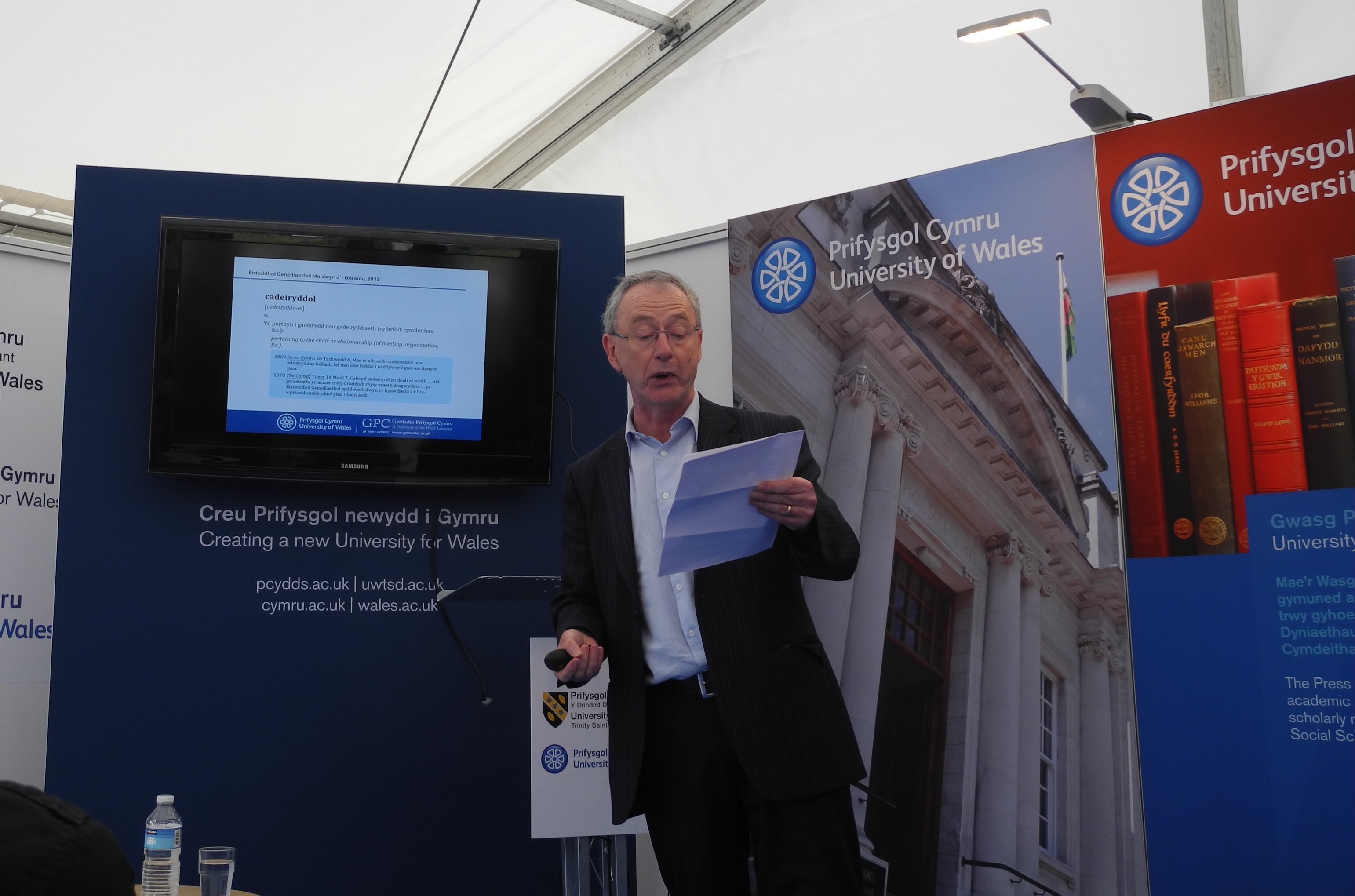 CAWCS Director, Dafydd Johnston, announces the addition of 400 ‘new’ words to the online dictionary at this year’s National Eisteddfod.

Did you know that the word ‘colofnydd’ refers to a ‘stylite’ (an ancient or medieval ascetic living on top of a pillar) as well as the more contemporary meaning of someone who contributes or writes a column for a magazine or newspaper?

And what about ‘coniac’? A word borrowed from English or French and first used in an article from 1876 and published in Y Gwladgarwr. According to the author (writing in Welsh) ‘there are many these days who say that the devil is in the cognac’.

A word coined almost a century later from the English ‘flash flood’ is ‘fflachlif’ – one of the hundreds of new technical terms arising from the growth in Welsh language education.

At the beginning of July, Angharad Fychan travelled to this year’s Irish Conference of Medievalists at University College Dublin, where she presented a paper on Geiriadur Prifysgol Cymru: The University of Wales Dictionary and its value to medieval Irish studies, as part of a panel on ‘Projects in Celtic Lexicography’. 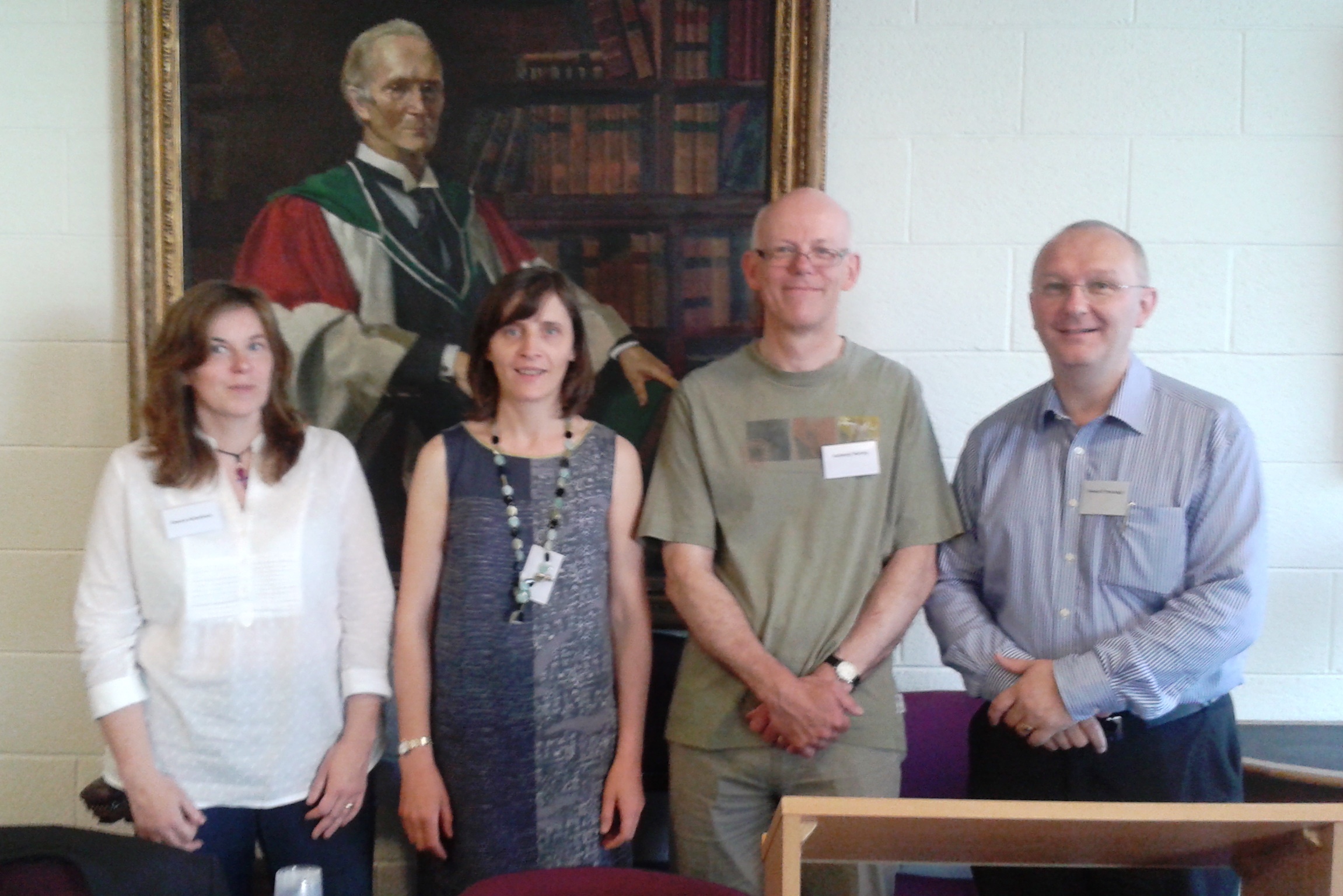 Also taking part was Roibeard Ó Maolalaigh from Glasgow University discussing DASG (Digital Archive of Scottish Gaelic) and Faclair na Gàidhlig (The Dictionary of the Scottish Gaelic Language) and their relevance to the study of medieval Gaelic, and Sharon Arbuthnot of eDIL (electronic Dictionary of the Irish Language) discussing revising and repurposing that dictionary.
The panel was chaired by Anthony Harvey, editor of DMLCS (Dictionary of Medieval Latin from Celtic Sources).

The session provided a valuable overview of the various projects and an opportunity to discuss ways of cooperating.

GPC in your pocket

We are delighted to announce that the Welsh Government has awarded us a grant of £40,500 from the Welsh-language Technology and Digital Media Fund to help develop apps for both the iOS and Android platforms.
The idea is to broaden access to the online dictionary by providing an intuitive and user friendly interface with the portability of a modern app.

There will be three options within each app:

(1) to download all the data so that GPC can be used without a WiFi/mobile data connection;
(2) to download everything except the quotations to save about half the space; or
(3) to access the data online in order to save storage space on the device.

The interface will be much easier to use on smaller screens, and we are confident that the new apps will be a boon to a large number of people.

The apps will be available at no charge in the new year.

To see further details of this and the other nine projects awarded a grant, see: Welsh Language Technology Projects across Wales. 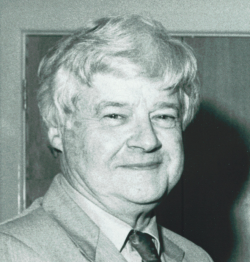 It is with great sadness that we record the death of Professor R Geraint Gruffydd who died at home on 24 March. He joined the staff of Geiriadur Prifysgol Cymru as an Assistant Editor in 1953 and remained on the staff for two years before taking up an appointment as Lecturer in Welsh at the University College of North Wales in Bangor. He returned to Aberystwyth as Professor and head of the Department of Welsh at the University College of Wales, Aberystwyth in 1970. He was appointed to the post of National Librarian of Wales in 1980 and then as the first Director of the University of Wales Centre for Advanced Welsh & Celtic Studies (CAWCS) where he led a pioneering project to edit and publish the whole canon of the Poets of the Princes. He retired from CAWCS in 1993 but remained a regular visitor and keen supporter of the Centre and its work.

He succeeded Professor Emeritus J E Caerwyn Williams as the Dictionary’s Consulting Editor in 1999, and continued to read proofs of the work and offer valuable comments on them until recently. His principal fields of scholarship were the literature of the Middle Ages and the Renaissance, but he took an interest in all aspects of the Welsh language and its literature. Although he was an exceptional scholar, he wore his vast learning very lightly.

We extend our deepest sympathy to his wife, Luned, and their children, Siân, Rhun, and Pyrs and their families.